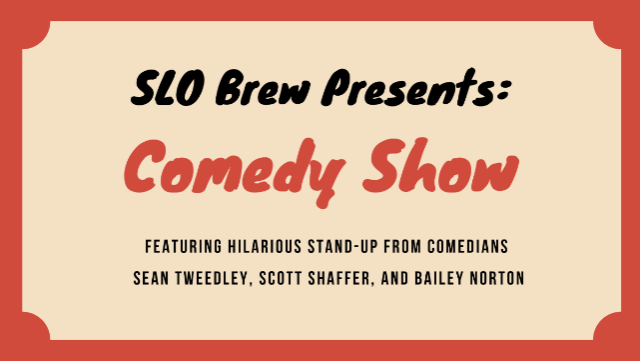 Join us for a night of hilarious stand up at our Comedy Show on November 25th at SLO Brew!

Sean Tweedley headlines clubs and colleges across the US, Canada and the UK. In addition to his starring role on the CTV/Comedy Network series, THE WARM-UP SHOW, Sean was Head Writer and “on air” side kick for Canada’s longest running late night talk show “Late Nights”.

Sean has appeared in the “Montreal Comedy Festival”, “The Boston Comedy Festival” “The Late Show with Craig Ferguson” and his own hour comedy special on CTV’s “Comedy Now”

Now based in Los Angeles, Sean recently starred alongside Vivica Fox in the film SHARK CITY and co-starred with Harland Williams in the stand up/sketch comedy special “CHILD WILD”.

Sean currently tours with Harland Williams and is a regular at The Improv, Ice House and Jon Lovitz comedy

here’s a reason Scott Shaffer is a booking favorite in every room of his hometown, Kansas City. Delivering a consistently dynamic performance of quick wit coupled with intelligent writing, Shaffer is an undeniable crowd favorite. Scott was awarded second place in the St. Louis Make Me Laugh Comedy Contest and won the Last Laffs Comedy Competition. In 2015 he performed at the Oddball Comedy Festival with the likes of Aziz Ansari and Amy Schumer.

About Bailey Norton: Bailey Norton is a comedian and writer living in Los Angeles by way of Springfield, Missouri. She can be seen doing stand up comedy all around the city at venues of all varieties; from Rotary Club meetings to The Comedy Store. She also hosts a monthly show at The Complex called Complex Comedy.