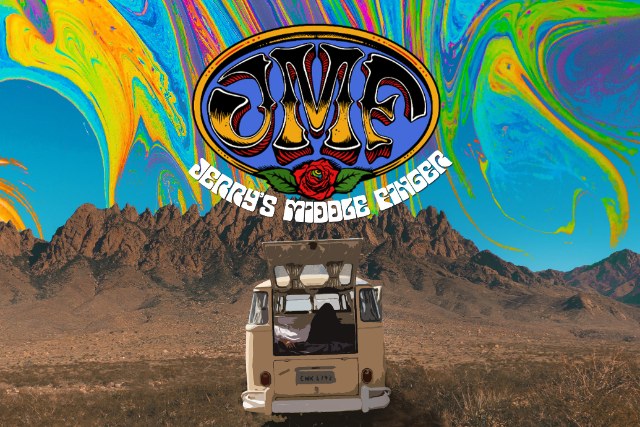 The west's best Jerry Garcia Band tribute experience, Jerry's Middle Finger will be performing and celebrating the music of JGB with unbridled energy and passion at SLO Brew Rock on Friday, January 24th!

With some of the strongest and most seasoned players and vocalists in California’s jam band community on their roster, they have been playing consistently to large audiences all over the west coast, packing venues and getting rave reviews.

Lead vocalist and guitarist Garrett Deloian has toured the world on the blues circuit, but in JMF he is allowed to truly shine and explore his passion and lifelong love for the work of Jerry Garcia. His guitar tone has been hailed by many of his musical peers, along with Jerry fans around the country, as one of the best “Jerry tones” out there. The energy Garrett brings to the stage is truly unique in the post-Jerry scene.

JMF’s rhythm section, with original JMF drummer/founder Rodney Newman and bassist Burt Lewis (of Stu Allen & Mars Hotel), consistently locks in on the dynamic explorative grooves, dipping and elevating the music delivering magic at every turn. The foundation they set for the songs, tapping into their mastery of Jerry’s songbook, pulls audiences onto their feet, energizing them to get up and move.

JMF has two outstanding powerhouse vocalists- Halina Janusz (of Mother Jones and Sugar Mountain) and Lisa Malsberger (of Grampa's Grass and The Rumrunners). Their smooth, rich vocal tones and soaring, stellar harmonies place JMF in a category all their own.

Jon Gold (Cryptical Development, Remnants of Eden, Oingo Boingo) rounds things out with some of the sweetest, funkiest, piano and "take me ta church!" organ solos you'll ever hear.

Together, this JMF line-up has been thrilling audiences all over the west coast with their authentic and passionate tribute to the fantastic music of the Jerry Garcia Band, keeping alive a concert experience that fans hope will last forever.